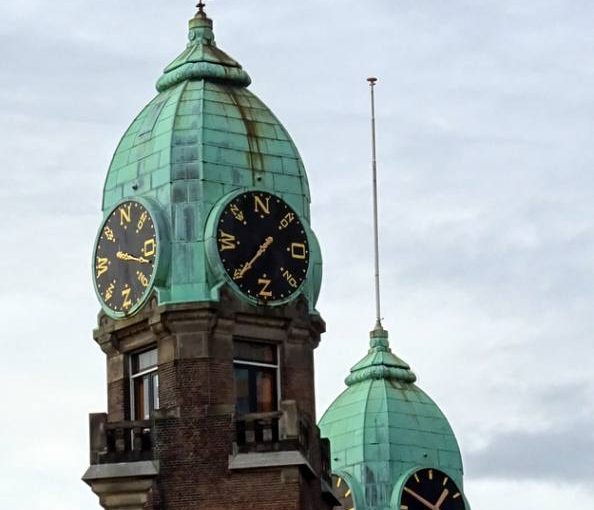 NO. 97 THE HISTORY OF THE GRAND OLD LADY OF ROTTERDAM

KLM’s miniature house No. 97 is a replica of the monumental Hotel New York, the Grand Old Lady of Rotterdam. The historic building (the former HQ of the Holland-America Line) is located at Koninginnenhoofd 1. Between 1880 and 1925, almost one million people departed from here to the New World.  Settling in America had always appealed to emigrants from across Europe, and the Rotterdam shipping company HAL played a central role in this mass migration.

Initially named ‘Nederlandsch-Amerikaansche Stoomvaart-Maatschappij’, Holland-America Line was set up in 1869 by two young and aspiring business pioneers, Hon. Otto Reuchlin and his friend Antoine Plate. Their first steam ship, the Ariadne, left port on July 4, 1872 to carry a company of immigrants to America. In that same year, Rotterdam was given the decisive boost that would rank it among the world’s major ports, as the newly constructed Nieuwe Waterweg canal gave it direct deep-water access to the North Sea.

A bridge across the ocean

By the end of the 19th century, Holland-America Line went full steam ahead. Thousands of inhabitants from the Netherlands’ northern provinces, along with massive numbers of Eastern European emigrants, made the journey to New York via Rotterdam for economic, religious or political motives. The crossing would cost them between 55 and 70 guilders, depending on the travel class they could afford. In 1893, Holland-America Line opened its own settlers’ hotel, which could accommodate no fewer than 900 guests. To speed up admission procedures at Ellis Island, the emigrants were already checked for hygiene, deloused and decontaminated here.

By now, Holland-America Line had commissioned 20 ocean liners to serve as a ‘bridge across the ocean’, and the company steadily expanded its operations. George, a son of founder Otto Reuchlin, decided to followed in his father’s footsteps, becoming one of the directors. In 1901, a new and robust head office was built close to the settlers’ hotel, designed by architects J. Muller and C.M. Droogleever Fortuyn. Board rooms laid out on the second floor allowed the directors to watch their ocean steamers arrive and depart. A warehouse was built on the back of the monumental building, while one of its corners featured a 38-meter high tower crowned by a green copper roof, designed by architect C.B. van der Tak.

Following the end of World War I, Holland-America Line’s head office underwent a third extension. Both the building’s exterior and interior were decorated with Jugendstil elements. The reliefs on the wall contain references to shipping and exotic destinations, including Indians and persons in Egyptian and Arabic attire. The new front facade was adorned with the words “Holland Amerika Lijn” in large gilded letters, as well as reliefs of the coats of arms of Amsterdam, Rotterdam, the Netherlands, New York and Batavia. To complete the extension works, was a second tower was built, incorporating a four-faced clock. Crowning the green copper roof was a weathervane with the silhouette of the De Halve Maen (Half Moon) VOC ship, as featured in Holland-America Line’s corporate logo. This is the ship on which Henry Hudson attempted to find a northern passage to the East Indies, discovering Manhattan by chance in 1609.

The heydays are over

By the early 1920s, no fewer than 14 million people from across the globe had settled in the United States, and the country was having a hard time coping with the massive influx. In 1921, attempts were made to ease the wave of immigrants, imposing strict quotas. As the reading and writing ability requirement proved insufficient, numerical limits were set for each country of origin. Holland-America Line’s heydays appeared to be over due to the new immigration policy, and the Rotterdam-based shipping company decided to change tack, focusing instead on offering cruise travel in the Caribbean in the 1920s and 1930s.

In the line of fire once again

On May 10, 1940, World War II broke out in the Netherlands. The Germans dropped paratroopers in Rotterdam, occupying strategic positions. The next day, they took possession of the SS Statendam III, moored at the Wilhelmina Pier, using it as a stronghold to take aim at the north bank of the Nieuwe Maas river. A Dutch marine company then opened fire, destroying the ship. Two more ships, the Boschdijk and the Veendam, suffered severe damage during the battle. In the Rotterdam Blitz, four days later, several of Holland-America Line’s barracks went up in flames due to the aerial bombardment, but the head office miraculously escaped destruction. Two weeks after the start of the war, the company relocated its headquarters to Curacao, with the executive board operating from London and New York. Between 1940 and 1945, the German occupying force confiscated 16 of the company’s 22 steam liners for use in its warfare.

Again, many saw their new life start in Rotterdam

After the liberation from Nazi Germany, Holland-America Line relaunched its operations, and in the following years it helped around half a million people begin a new life in such countries as Canada, Australia and New Zealand. At that time, its fleet numbered 25 liners. With competition from airlines heating up, Holland-America Line decided to discontinue its regular trans-Atlantic passenger service to New York in 1971. The Nieuw-Amsterdam II was the last of its passenger liners to make the crossing, on November 8 of that year. One year later, the settlers’ hotel was demolished to make room for a container storage facility. Holland-America Line then relocated to the United States in 1978, where it could serve the booming cruise travel market better. Nevertheless, the company’s departure was widely deplored, given its manifest significance in Rotterdam’s maritime and economic history. In its century-long existence, its 133 vessels transported nearly 4 million passengers and 75 million tons of cargo. The distinctive building with its two green towers, at the head of the Wilhelmina Pier, was put up for sale. After many years of dilapidation, the building was occupied by squatters in 1988, after which the City of Rotterdam decided to purchase ‘the Grand Old Lady’ for 26 million guilders a year later.

It took until 1993 before the former head office of Holland-America Line began its own second life. In May of that year, a bottle of champagne was swung at its facade, marking the festive opening of Hotel New York. At that time, the Wilhelmina Pier was still poorly accessible, but with the iconic Erasmus bridge constructed three years later, the entire ‘Kop van Zuid’ district came to life. Hotel New York offers 72 rooms, furnished in maritime grandeur, including the towers converted into splendid suites and the ornately appointed board rooms. The former caretaker’s house on the roof was converted into a luxurious penthouse. Hotel New York is a monumental celebration of Rotterdam’s rich maritime heritage. 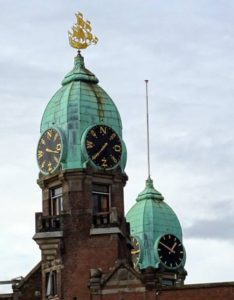 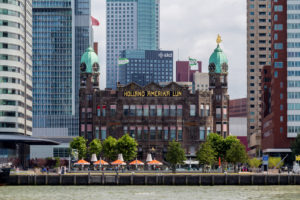 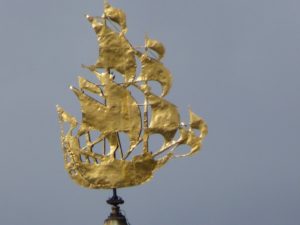 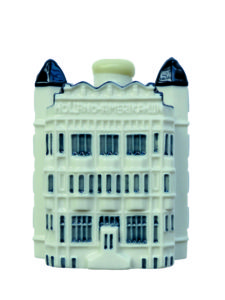 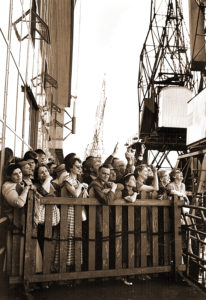 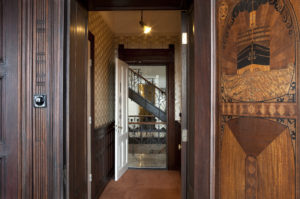 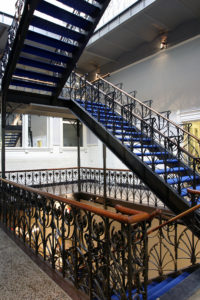 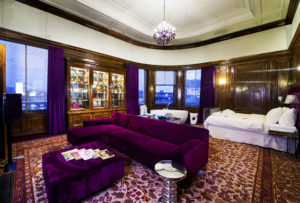 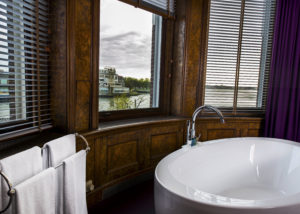 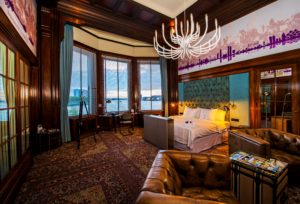 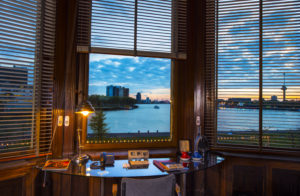