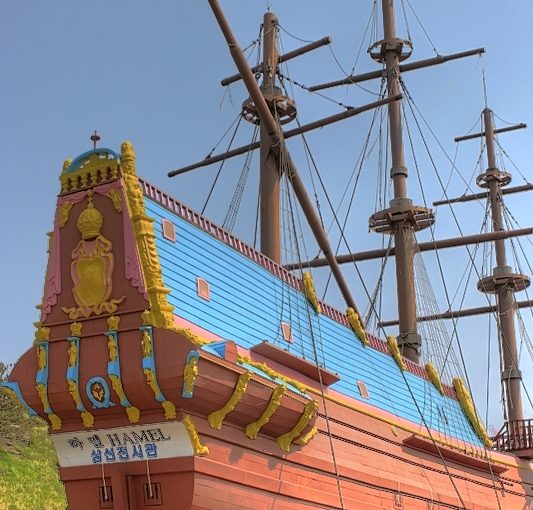 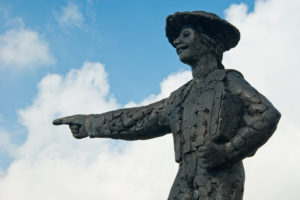 In the 17th century, Hendrick Hamel of Gorinchem was the first Westerner who got a chance to experience life in forbidden Korea, and he was able to record this extraordinary adventure first hand. In his journal, he described the fate of the crew of the VOC yacht the Sperwer. When the yacht shipwrecked in 1653 off the coast of the volcanic island Jeju-do, only 36 survivors were left. The castaways were caught by Korean forces. After thirteen years of imprisonment, Hamel and six Dutch crew members escaped to Japan. Thanks to his extensive account, the ‘discoverer’ of Korea is considered to be Dutch Marco Polo. His house in Gorinchem modelled for KLM-house No. 96, the miniature was revealed on October 7, 2015. 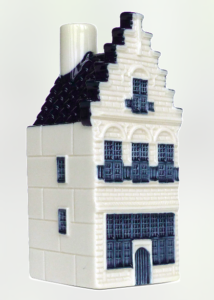 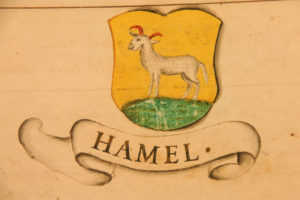 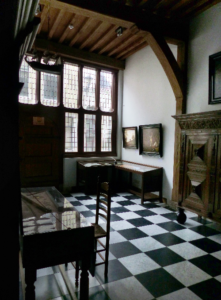 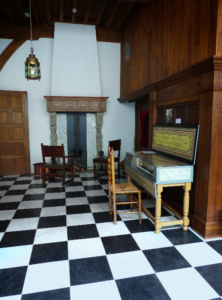 Hendrick Hamel was born in 1630 in Gorinchem. Four years earlier, his father Dirck Fericks Hamel bought a house on Kortendijk 67, for 540 guilders ($20.234 in today’s money). However he didn’t earn enough money to support his wife and six children, so after the birth of Hendrick, the mortgage on the house was doubled. When the boy was eleven years old, his father died and the Hamel family was forced to leave their home. Hendrick Hamel was just twenty years 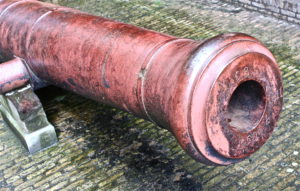 old when he joined the VOC Amsterdam (the Dutch East Indies Company), where he became a gunman, and learned how to fire cannonballs. The job provided him a monthly salary of 11 guilders – $100 in today’s money. On November 17, 1650, Hendrick boarded the vessel Vogelstruys, a ship with forty guns, for a journey from Texel to Batavia in the Far East. It would be another twenty years before he would see his family in Gorinchem again. The young man started an incredible adventure that would eventually make him famous.

After traveling for nearly eight months, with only a stop at the Cape of Good Hope, the Vogelstruys arrived in Batavia on July 4, 1651. Hendrick Hamel was excited and thoroughly enjoyed his new life. He had obviously heard the stories of pirates and enemy ships, knew about the dangers at sea and had proven his ability as a gunman. In order to further his career, he also learned to write. Some time after his arrival in Batavia, Hamel was promoted to assistant accountant, responsible for keeping the ship’s log and the administration on board. In 1653, Hamel became bookkeeper on the VOC ship the Sperwer. In rank, he equaled the coxswain, and his monthly income doubled.

On June 18, the ship left Batavia with 64 crew members and sailed to Formosa (Taiwan). After the passengers, including governor Cornelis Caesar and his family, disembarked and the cargo was unloaded, the Sperwer departed to 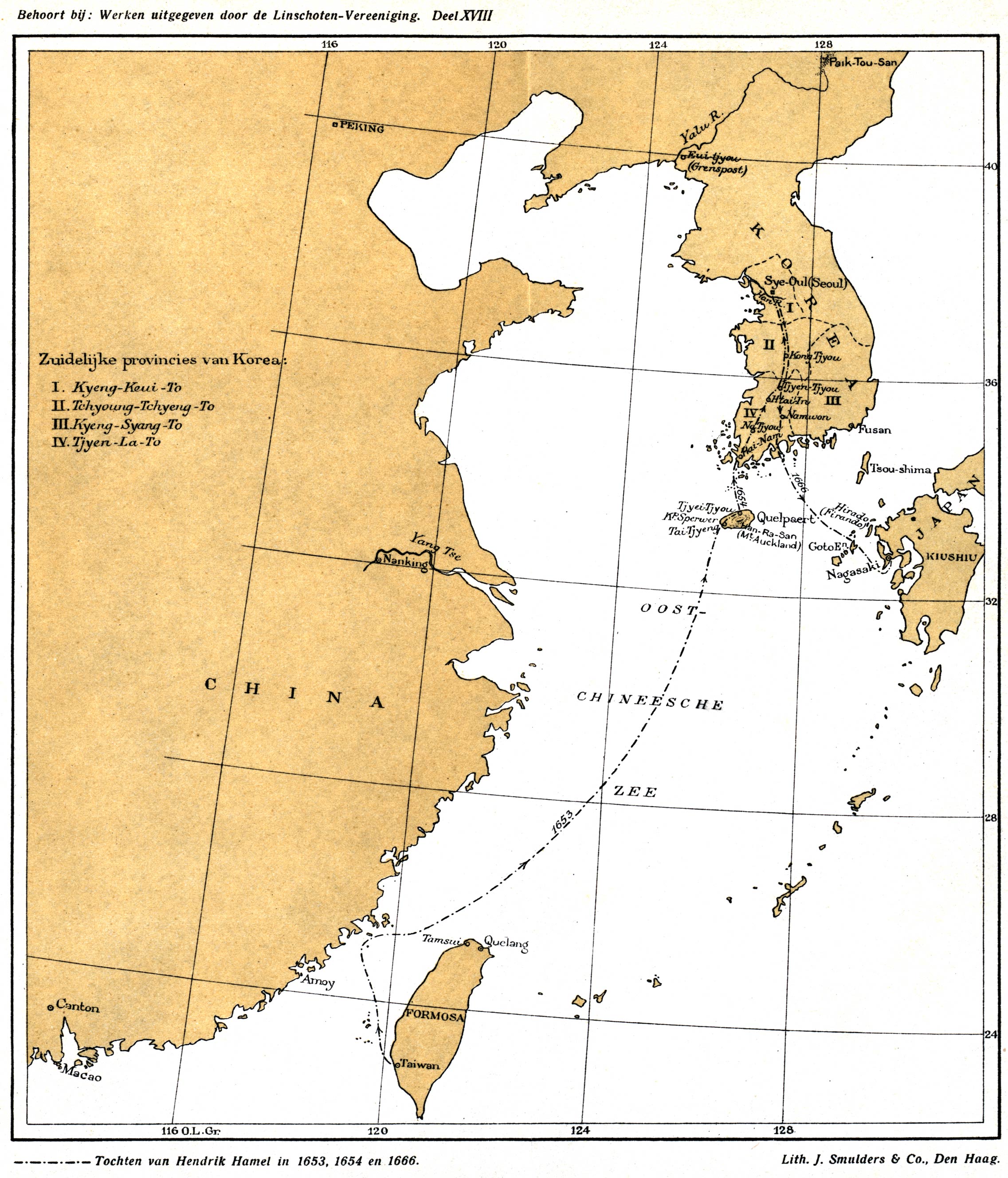 its next destination: the Japanese island of Deshima, off the coast of Nagasaki, where a Dutch trading post was located. Very strong winds and high waves made the trip a dangerous enterprise. The sea was so turbulent that the Sperwer keeled violently, a high wave swept the galleon and the transom away and the ship started to leak. The storm continued for five days. The crew fought against the elements, but it was an unequal struggle. Again, a huge wave, as high as a house, swept over the deck. Captain Reijnier Egberse shouted to the crew to prepare for the worst. At just that moment, the cabin boy shouted: land ashore! The anchor was dropped, but due to the depth of the sea and the fierce wind, the Sperwer hit the rocks and was completely smashed to smithereens.

Several men jumped overboard: others were swallowed by the waves. Fifteen men finally reached the coast by swimming to an uncharted island. The castaways had no idea where they were, while the moaning of people still inside the wreckage continued. The survivors couldn’t find anyone in the dark, nor help them. Only the next day, Saturday, August 16th, 36 men were counted among the survivors, some were seriously injured. The beach was littered with corpses, including that of the captain of the Sperwer. After the bodies were buried, the castaways went searching for food, they brought many things ashore and made a tent of some pieces of sail. 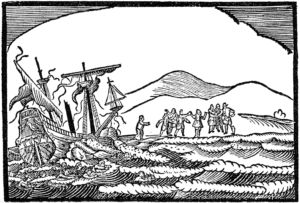 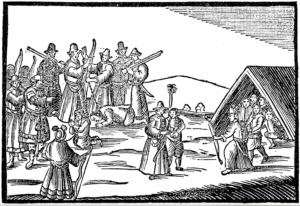 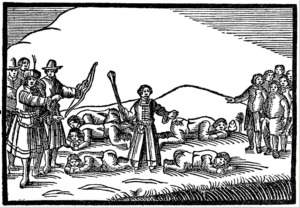 The next day, the survivors saw a human being walking at a cannon shot’s distance. Shortly afterwards, three people with Chinese hats made of horsehair came to their tent. By nightfall about hundred armed men arrived and surrounded the crew and guarded their tent. The following day at noon, about 1,000 men appeared, some on horseback. Hendrick Hamel and three others had an iron chain put around their neck, with a bell attached to it. The men had to crawl on all fours to the commander, with their face down. Since they did not understand each other, the men were allowed to crawl back again, and the crew of the Sperwer was given some boiled rice to eat. A few days later, the men were brought to the governor of Jeju Island. The interrogation of the ship’s survivors went difficult; finally the governor decided to write a letter to the king in Seoul for advice.

The fate of a castaway

A few weeks later, on October 29, 1653, Hendrick Hamel, the head coxswain and the petty barber were summoned before the governor. They were presented to Yön Pak Sang, an interpreter with a pale face, blue eyes and a reddish beard. The tall man turned out to be a Dutchman too, from the North Holland village of De Rijp. Just as the men of the Sperwer, he had been shipwrecked in 1627, and was captured by the Koreans to learn from his knowledge. This Mr. Jan Jansz Weltevree (his real name), had lived for 26 years in Seoul because King Hyojong would not let him go. 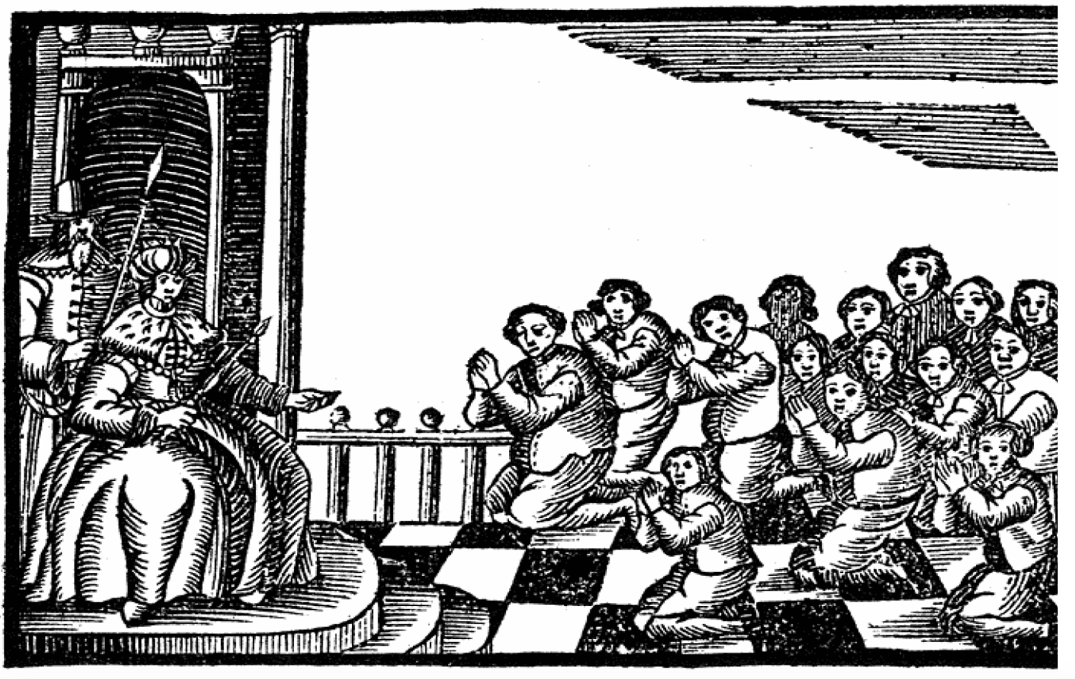 During the Joseon dynasty (1392-1910), the Korean borders and ports were closed to protect the country from foreign powers. Korea had to remain a mystery to the outside world in order to save its people from foreign attempts to influence their culture. It seemed that the crew of the Sperwer was awaiting the same fate as Jan Jansz Weltevree.

An audience with the king

The castaways of the Sperwer were allowed to move freely on the island and were provided with food and shelter. Ten months after the disaster it was still unclear what would happen to the castaways and six men, impatient for an outcome, ventured an escape attempt. The governor caught them however, and as punishment they were given 25 strokes with a cane on their bare buttocks. Eventually, the crew was transferred to Seoul and summoned to the royal court. Again they pleaded for their release, but King Hyojong asked the Dutch interpreter to tell the men  that foreigners would never get permission to leave Korea because he did not want information about his country to be leaked. The king promised to take good care of the men and they all received a job as a bodyguard.
The Dutch became part of the Korean community, learned to speak their language, and the integration was so 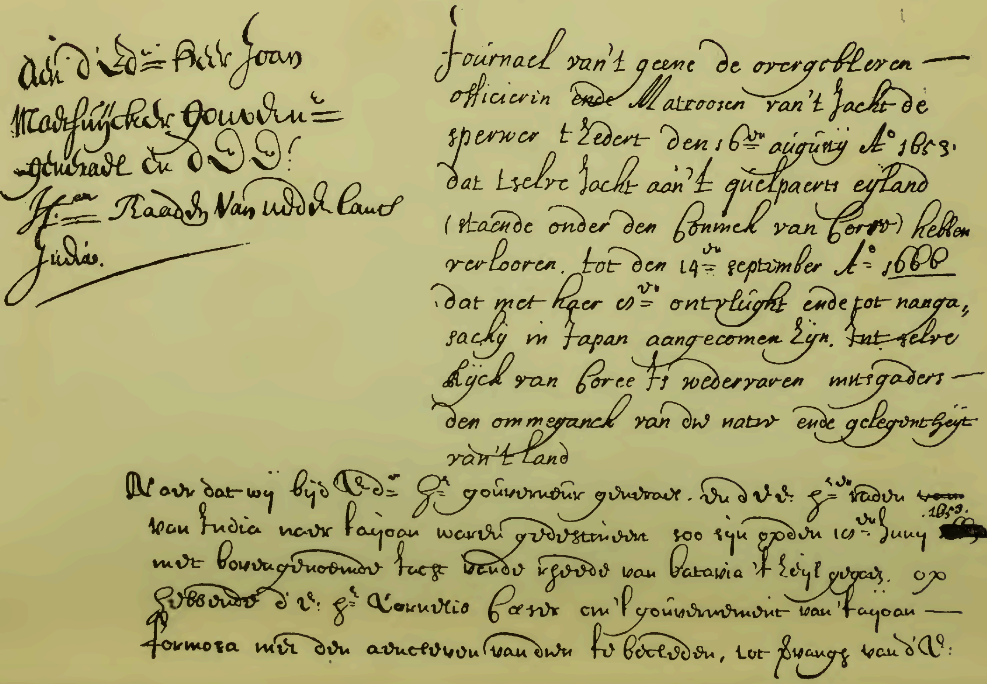 complete that some  Dutchmen married Korean women and started families.

One day, an envoy of the Chinese emperor came to Korea to collect the annual taxation which was laid upon the Korean nation. Two Dutchmen attracted his attention and told him that they were being held against their will. This time a penalty was out of the question, because the king realized the men had no mischievous intentions. An exile to Thiellado followed, where they had to provide for themselves by begging and selling firewood.

The years passed and even though the Dutch had adapted to the culture and customs of their hosts, they never forgot their homeland. In the 1660s, many Koreans died from drought and famine, and the Dutch were divided across three cities. Hendrick Hamel arrived in Gangjin and again, he and several other men conspired an escape. In 1666 they managed to flee Korea by boat to the Japanese island of Deshima. On September 13, seven men arrived in Nagasaki and were brought to the Dutch trading post on Deshima, where they were reunited with their countrymen. Their ordeal had lasted exactly thirteen years and 28 days. The Japanese, however, did not let them go immediately to Batavia; they wanted to check whether the men were spies. After a year they finally got permission to leave Deshima. During his stay on the island off the coast of Nagasaki, Hendrick Hamel wrote a journal about his Korean adventure. Meanwhile in Korea, the remaining eight Dutch crew members of the Sperwer were freed and transferred to Deshima. Japan had told the Koreans that Holland was subordinate to Japan. The king then gave the men their freedom, out of courtesy to neighboring Japan.

On October 22, 1667, the crew of the Sperwer was allowed to leave the next day with a boat to Batavia. Upon their 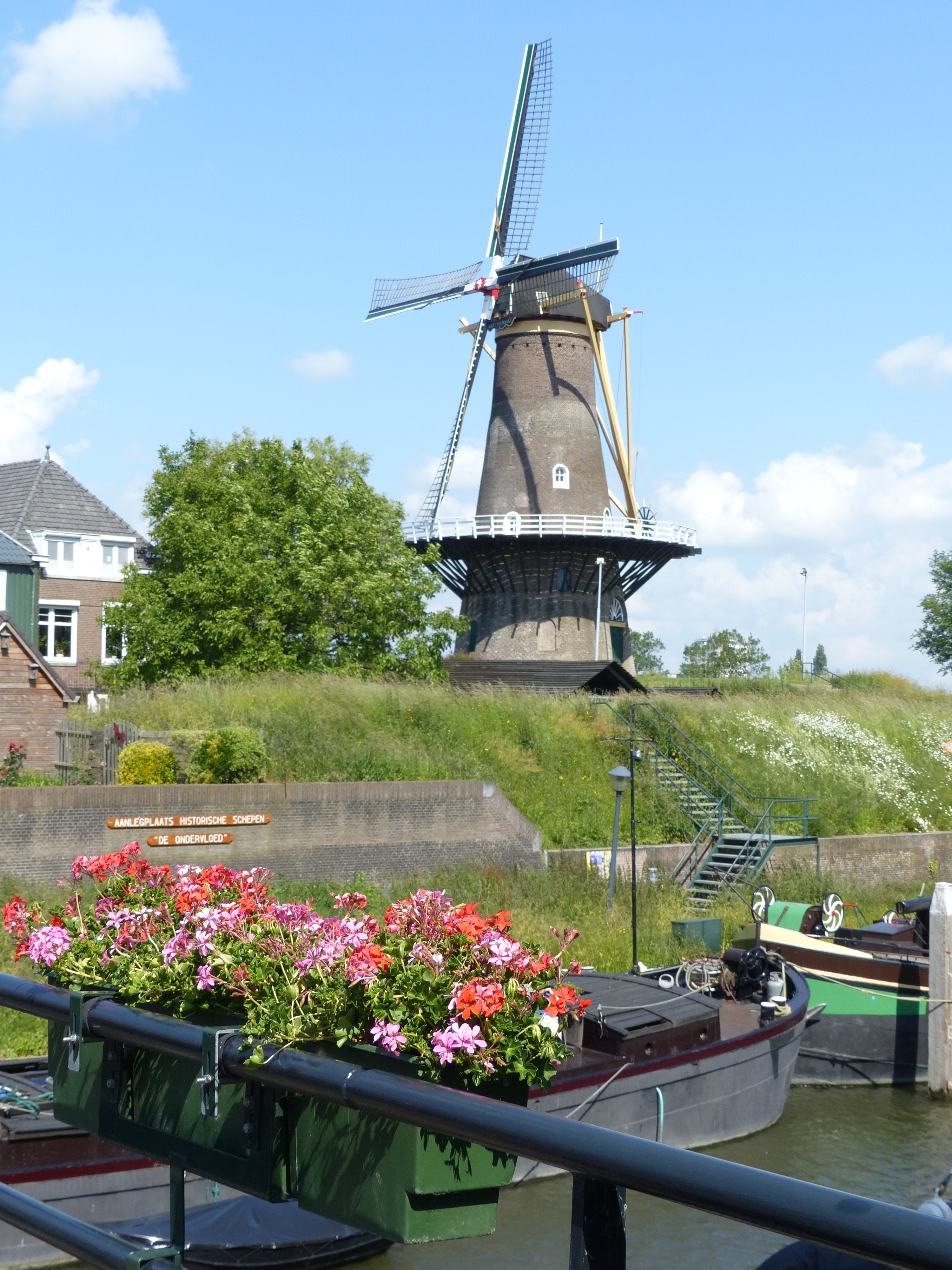 arrival, Hendrick Hamel handed his journal to the governor. Some of the men traveled to Holland and arrived on June 20, 1668. Hamel returned a year later, he was a bachelor and no family was waiting for him. To his surprise, has had become a celebrity, his journal had been issued by the Dutch East India Company and was a bestseller throughout
Europe. Hamel settled in 1669 in his hometown Gorinchem, and saw that his birthplace on Kortendijk was now occupied by the pipe maker Cornelis van Kreulen. Two years later, he departed again to Batavia and only returned to Gorinchem in 1690. On February 12, 1692 Hendrick Hamel died in the city where he was born 62 years earlier.

In Korea, Hendrick Hamel is a celebrity because he put the Asian country on the international map. He is seen as the ‘discoverer’ of Korea, and is also known as the Dutch Marco Polo. Today there are still Koreans with blond hair and blue eyes, who are thought to be descendants of the 17th century castaways. Some Dutch words are still part of the Korean language, like ‘Oppa’ for grandfather, and ‘Omma’ for grandmother. That the Dutch sometimes tried to fool the Koreans in the 17th century is perhaps reflected in the word ‘toktok’, which is Korean for ‘smart’, but in Dutch, it means that (with a corresponding gesture) someone is crazy. 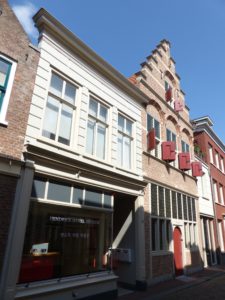 The Hendrik Hamel Foundation was founded in 2005 in Gorinchem to underline the enduring cultural, economic, educational and tourism links with Korea. To commemorate the historic link, Gangjin, where Hamel lived for seven years, has been the sister city of Gorinchem, with its own Hamel Memorial Museum, a statue of the most famous resident of Gorinchem, and a cannon from the time of the shipwreck of the Sperwer. In the port of Yeosu, the place where the men began their escape to Japan in 1666, a lighthouse is named after Hamel and a statue in recognition of the discovery of the Dutch Marco Polo.

In 2009, on the site of his supposed birthplace in Gorinchem, a replica of the Hamel Home was built to house a museum dedicated to the son of Gorinchem. The Hamel House was officially opened in June 2015.