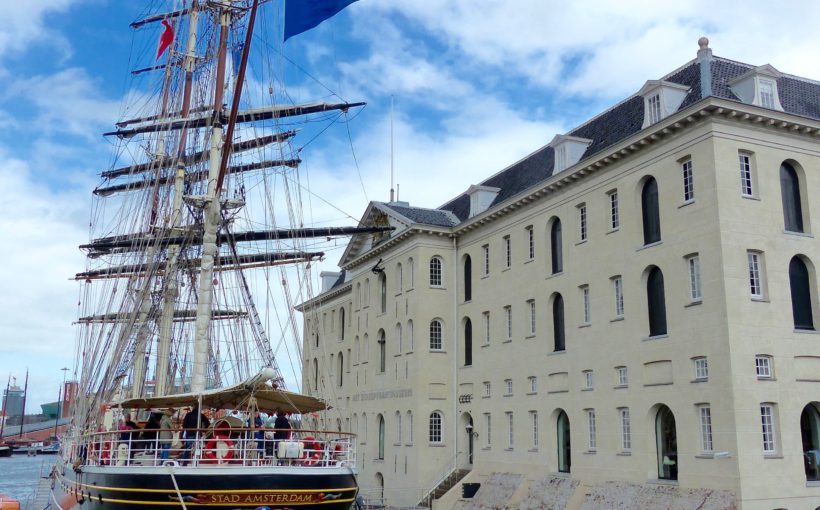 COLLECTOR’S ITEMS: WHAT ARE THEY WORTH?

KLM was established on October 7, 1919, and since 1994, on KLM’s founding date, a new miniature house is issued and presented to intercontinental passengers in Business Class. Each year, about 850,000 Delftware replicas are filled with Dutch genever, 150,000 houses remain empty for travelers to destinations where alcohol is prohibited.

Avid collectors across the world reserve a business-class seat on the anniversary day, just to be the first ones to receive the latest piece. To date, 96 miniature houses have been released. More than half of the miniatures are modelled after canal houses and landmarks in Amsterdam, but notable architecture from other towns scattered around the country is represented as well. KLM house No. 85 stands in Willemstad, on the Caribbean island of Curaçao. The selection process is quite secretive: airline executives and the liquor supplier, Bols, are said to take turns making the choice. Traditionally, it is the president of KLM who makes the final decision. 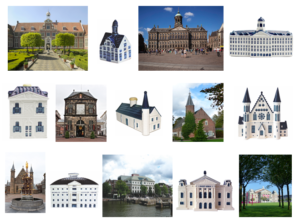 In addition to the regular release, there are nine exclusive pieces as part of the collector’s edition. The first of this rare series was issued in 1962 to mark the occasion of a unique retrospective exhibition of the celebrated Dutch Golden Age artist, Frans Hals who lived and worked in Haarlem. The Delftware miniature is a replica of the Frans Hals Museum in Haarlem. Subsequent releases include the Royal Palace in Amsterdam and the Weigh House at the Gouda cheese market, both are treasured Dutch landmarks.

The value of the collector’s edition lies not just in the sentimental significance of the buildings, but with the stringent qualifying criteria. The Royal Palace piece, released in 1986, was only presented to honeymooners traveling in first class. Over the years, several other versions of the Royal Palace were issued. The largest version is about 50 cm wide, 27 cm tall and 11 cm deep. This king-size miniature is awarded to the winner of the KLM Open Golf Tournament. Only one has been produced annually since 2004. On April 30, 2013, the day Willem-Alexander ascended the throne to become king of the Netherlands, Business Class passengers who boarded an intercontinental flight at Schiphol Airport were all given a special and small edition of the marvelous Royal Palace. Even more exclusive is the 360° version of the 17th-century edifice, with both front and rear facades, which KLM commissioned in the summer of 2014. This miniature is given by the president of KLM as a business gift to diplomats and important (foreign) partners. 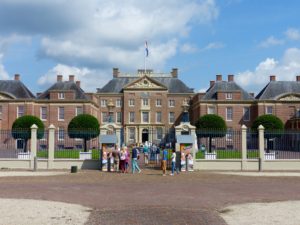 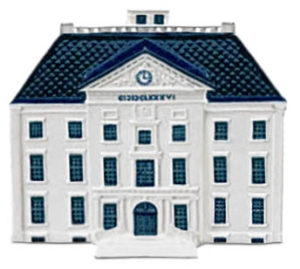 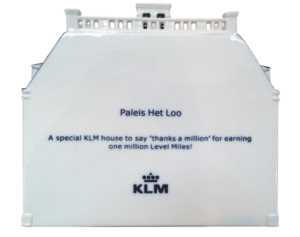 Collector’s edition No. 8  (Royal Palace Het Loo) is only awarded to those who have flown World Business Class at least 60 times a year for 10 consecutive years and have accumulated more than one-million air miles in KLM’s frequent-flyer program. The little blue and white palace model is presented to the Platinum-for-Life passenger on a silver platter at the end of the qualifying flight, and no, you can’t keep the silver. The bar may be set high, but 45 customers received this piece in the first year it was issued, so it is not unattainable! To date, not one Platinum passenger has put her miniature palace on the market.

The latest collector’s item was issued on January 19, 2016. During the first six months of this year, the Netherlands holds the Presidency of the Council of European Union.  The newest miniature represents the Maritime Museum in Amsterdam, which is the venue for top formal and informal ministerial meetings. 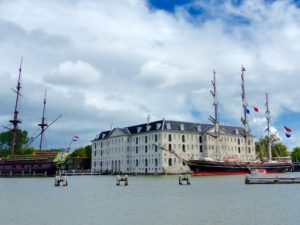 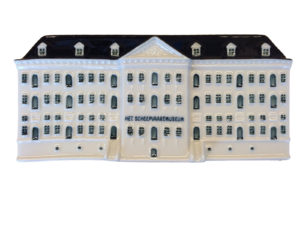 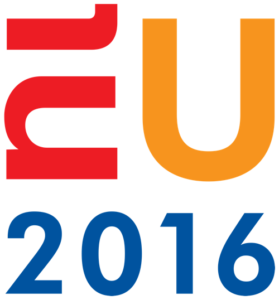 Below is the average value of nine collector’s items